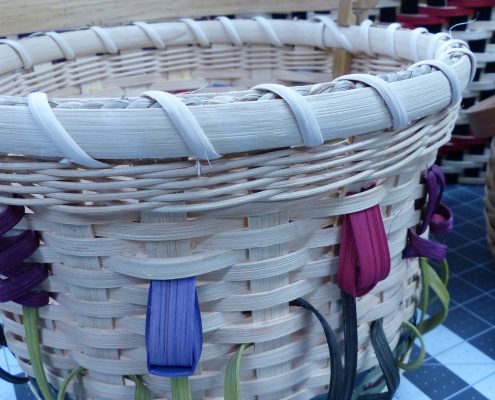 The basket above has a circumference of 28″, I used a lasher that was 82″. So two and a half times around (70″) is just a few inches to short and three times around (84″) works perfectly.  BUT

This basket, Voltage, has a circumference of 37″, I needed a lasher that was 186″. That is over five times around the basket! Obviously this three times rule doesn’t always work.

After taking a lot of notes and trying several different methods, I made up a formula. For many years now, I have been using my lash formula whenever I lash with flat or flat oval reed. I also use my lash formula to determine how much lasher to add to kits. It works. Every time. You might find it helpful also.

The old rule, three times around the basket, works for baskets that have a simple construction (i.e. over one, under one weave with 1/2″ stakes spaced about 1/2″ apart) however circumference is not the only thing to consider when determining lasher length for your basket. Lasher length is determined by a combination of number of stakes, basket circumference and rim width and thickness.

How to figure out lasher length for your basket (without handles)

I’m going to give you a formula – don’t roll your eyes and think this is a lot like math, because it really is simple and it really doesn’t take but a minute or two to figure out. Use a calculator or your phone or a piece of scrap paper – this is just one small step to insure that you don’t run out of lasher!

Let’s break it down:

Let me demonstrate on my Herringbone Carrier:

The basket has 32 stakes. 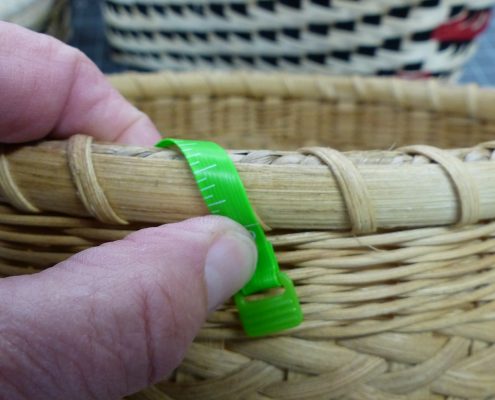 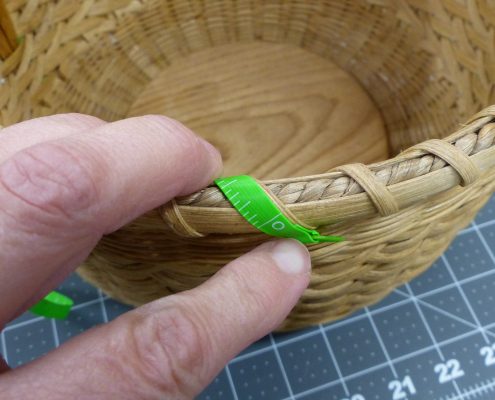 So let’s plug in the numbers:

Eighty-eight inches – I used 84″, and appreciated the 4 extra inches!  🙂 That extra minute sure beat being 4″ short!

How to figure out lasher length for a basket with handles

If your basket has handles and you plan to add an X where the handle and rim cross, you will need to add extra length.  I do have a formula for this, but even I think it’s overkill. The bottom line is it typically works out that you need to add 6″ for each handle you want to X. 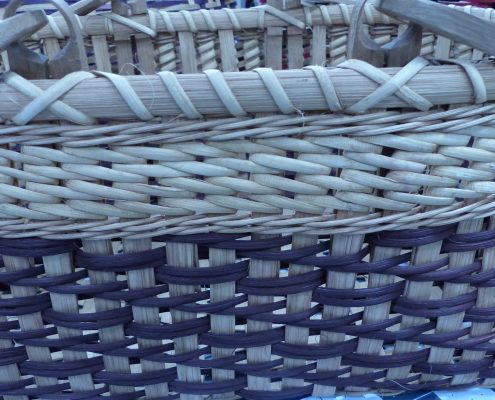 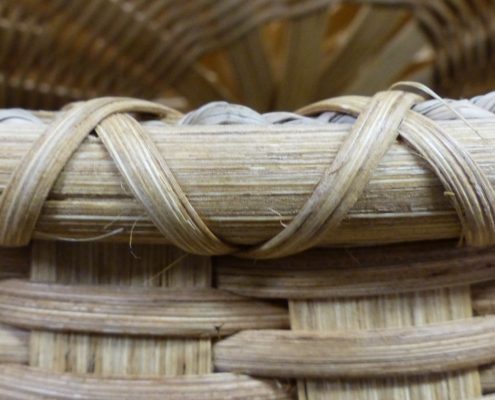 If you are double lashing (going around the basket two times), you just need to double the number of stakes. For example, if I had double lashed the Herringbone Carrier we used earlier, I would have doubled the 32 stakes and the formula would look like this: (2.5 x 64) +8 = 168. One hundred and sixty-eight inches of lasher.

If you are V lashing (see my V lash tutorial here), Figuring N is a little more complex since you will be lashing around the basket once, but going into each space twice.  Here’s what you need to do: 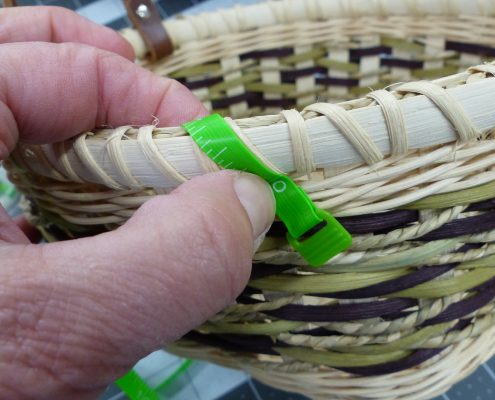 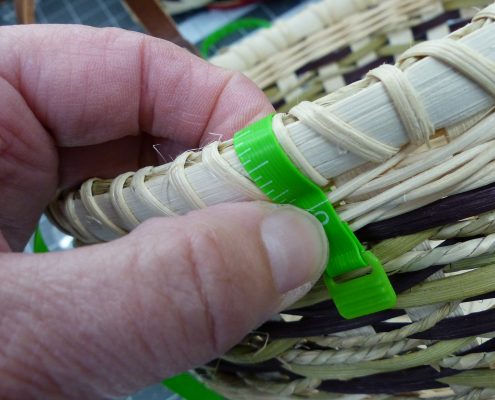 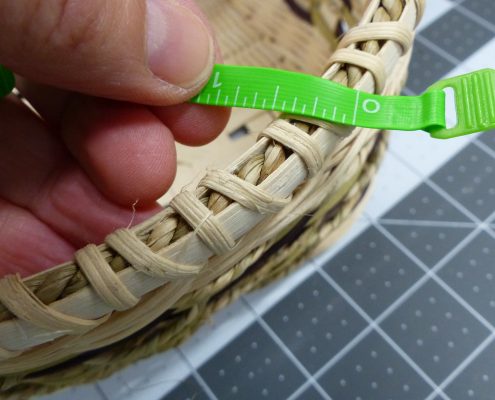 Now we need to measure the part under the rim, and it is easier to measure the top of the rim. And because the lasher loops into each space, twice we will need two numbers, be sure to measure once on a diagonal (pictured) and once straight across (not pictured). Make a note of both numbers and add them to the first two numbers. 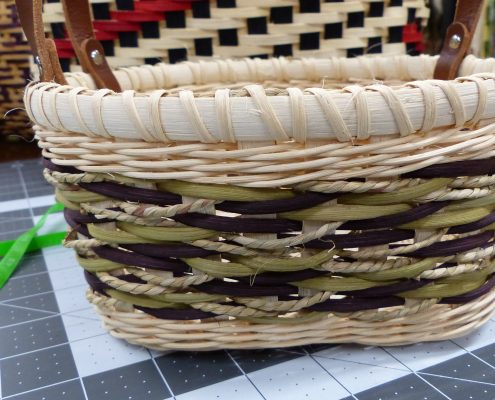 This is my Braided Muffin Basket, and these are the measurements I  used to get N

This basket has 32 stakes so this is my formula:

Why this is important?

Because I hate running out of lasher two or three stakes from the end. It is also very helpful to know how much lasher to add to a basket kit. I usually try to add extra to account for breakage. I can’t do anything about those coils of reed with only short lengths and sometimes lashers break, so on occasion I have to add on. But it really is nice to know how much lasher a basket requires. 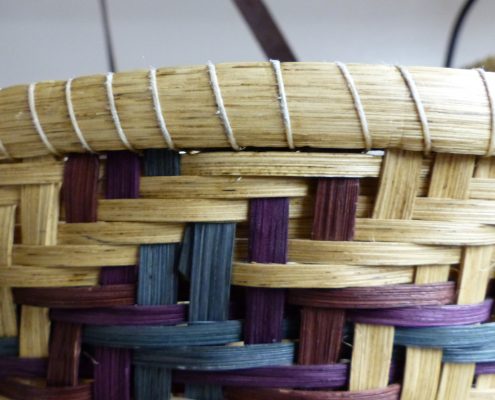 While I do use this formula to determine how much waxed linen I will need to lash a basket. I use mutiple shorter lengths, because it is easy to add to a waxed linen lasher and completely hide the knot (see my tutorial here). Just be sure to add 8″ for each length, that way you will have plenty to work with for adding on and ending. 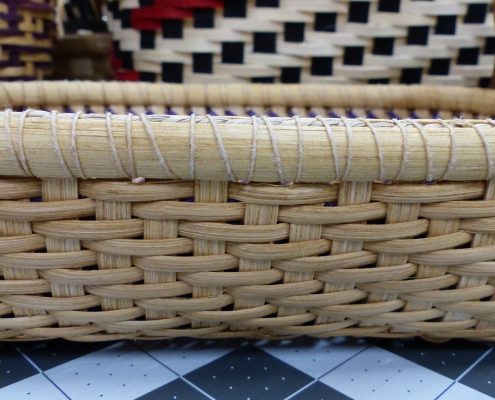 You may also find my earlier post on Lashing Basics helpful. You will find it here.

And, as always, thanks for reading the Basket Teacher