Over the years I have met weavers who love lashing a basket and weavers who hate lashing a basket. I used to dislike lashing. For a while I tried finishing a basket anyway I could without lashing a rim, but I always went back to the lashed rim. I love the classic look. Over time I’ve grown to enjoy lashing – mostly because finishing a basket gives me sense of accomplishment, but also because I have acquired a lot of practice and some great lashing tools. So I am going to review my favorite lashing tools and talk about starting and ending the lasher. (There are so many lashing techniques I’ll leave those for future posts.)

The best way to start and end a lasher is to hairpin it over the side of the basket – under the rim and the rim filler. 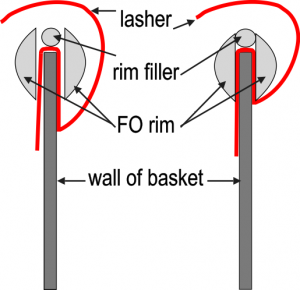 This gives a secure anchor for the lashing. When this technique is repeated at the end of the lashing, it  gives the rim a seamless appearance – no beginning, no ending. Looks great. It can be a little tricky to hairpin it over the wall, especially when you are finishing up the rim, however, using a packer or an awl helps to open up a space to slide the lashing in place.

I use my Lash Ender to start and end the lasher. It’s a simple tool, the tool end is a flat piece of metal with a hole, or an eye. It’s thin, so it slides into that tight space without damaging the rim and the eye holds the lasher while it is pulled into place. 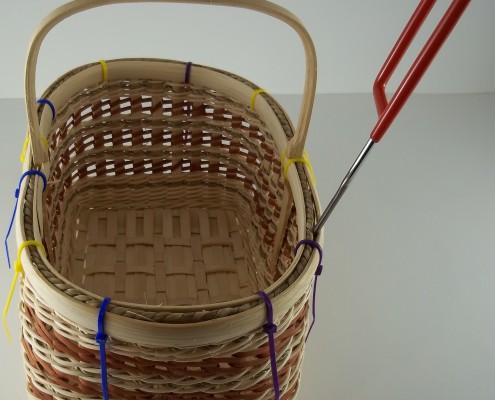 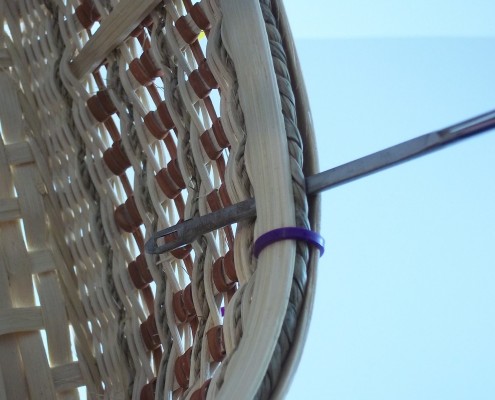 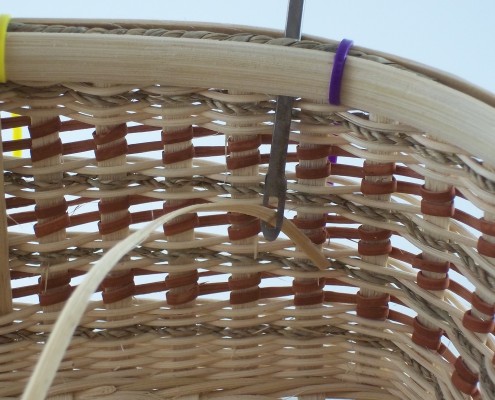 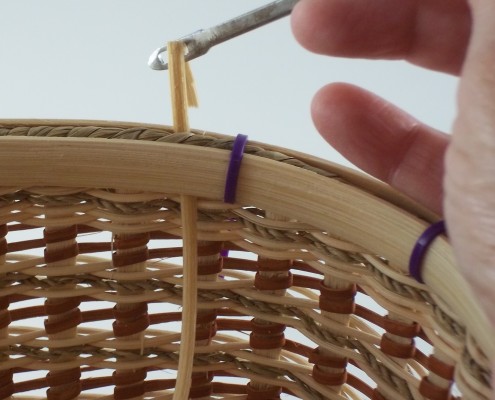 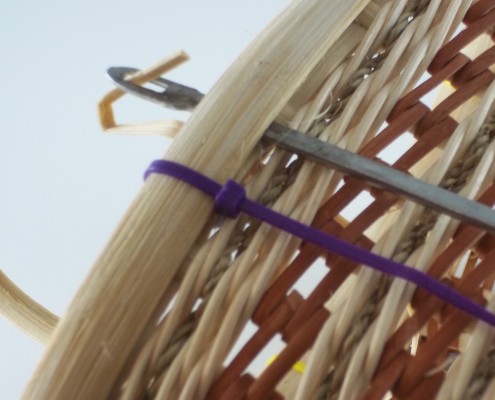 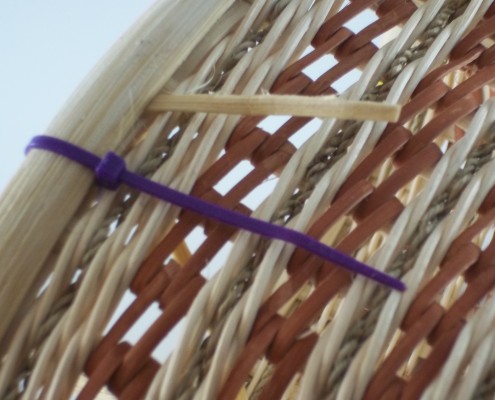 Anchoring the lasher can be accomplished using an awl to open up the spaces, but you can see how this tool simplifies the process.

Now you are ready to lash the basket. There are lots of lashing techniques, but basically lashing is wrapping the rim securely against the rim row. This is done by inserting the lasher into the space between two stakes (and between the rim row and top row of weaving), pull the lasher taut, up and over the rim while bringing it over one stake to the left or right. Now insert it into that next space. It is easiest to lash from the outside to the inside of the basket.

An awl or a packer can be used to open up any tight spots. There are also a couple of tools available to help with this. I like to use the EZ Lasher to lash basket.

This is probably my favorite basketry tool! 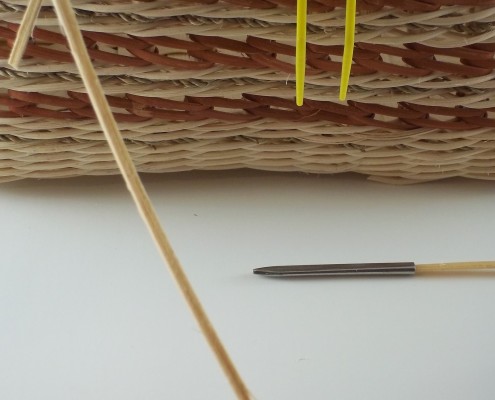 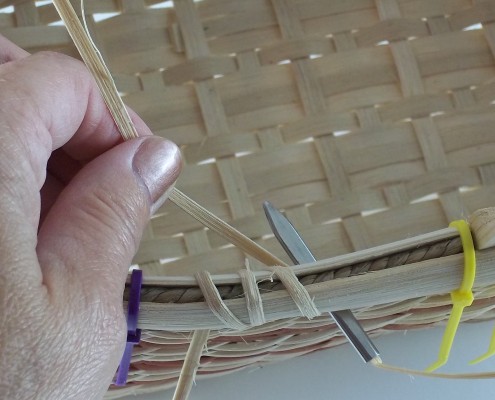 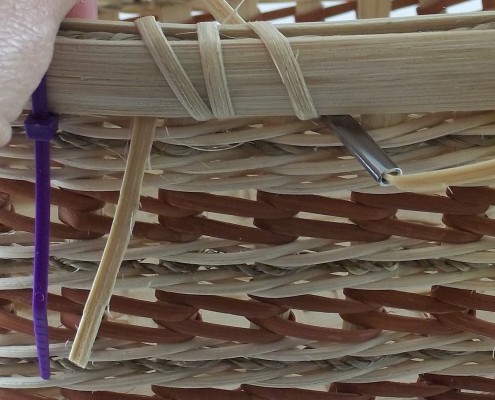 When you get all the way around the basket, the lasher should be on the inside of the basket.

The lasher is ended by hair pinning it over the basket wall, under the rim – just like you did at the beginning.  But as you can see its a little trickier now because the rim is firmly in place and its difficult to maneuver the lasher under the rim.  You can use an straight packer or and awl to open the space and thread the lasher along the awl and into place. However, this is where the Lash Ender is really worth its price tag. 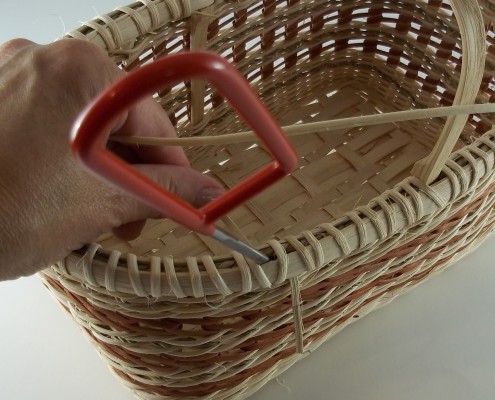 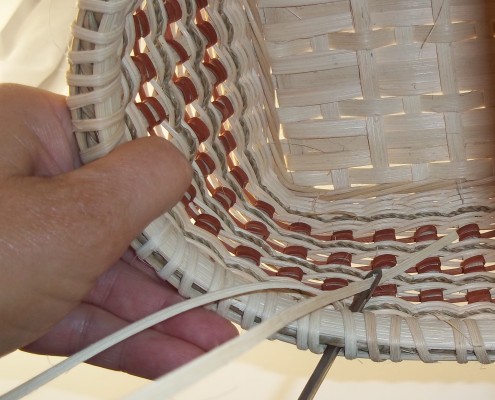 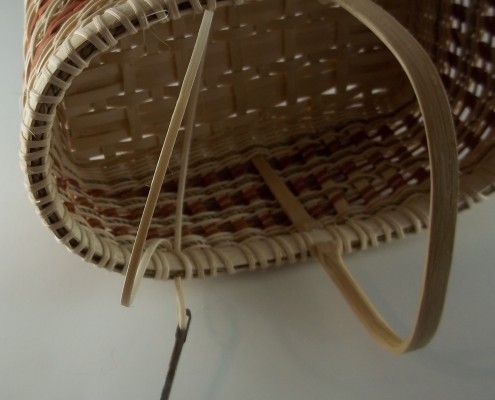 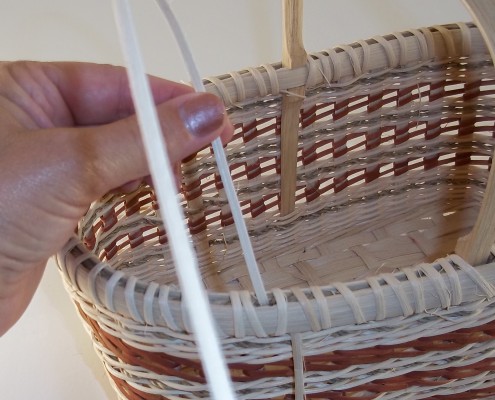 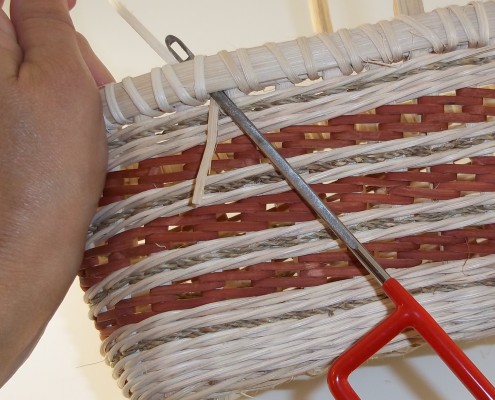 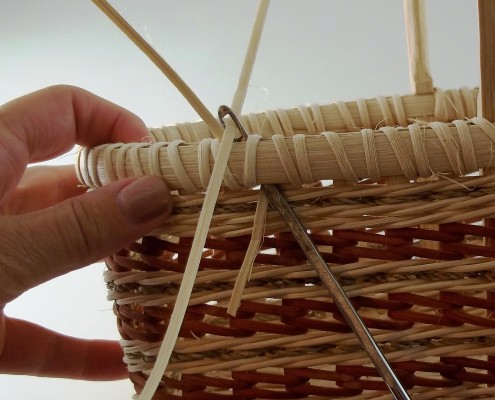 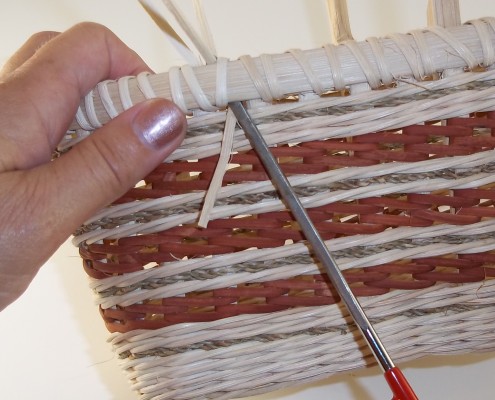 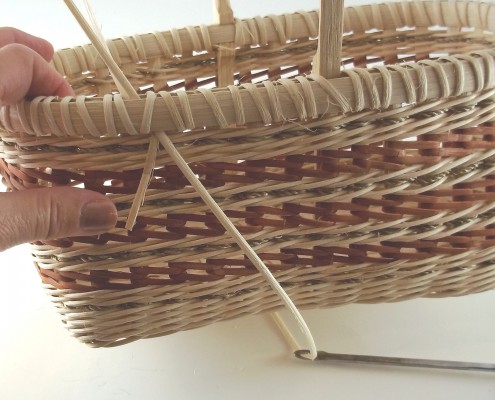 Another lashing tool that I have and use on occassion is the Lash Saver or Lash Buddy.  I won’t write a tutorial on how to use it because East Troy Basketry already has one, just click here to read it.

These aren’t the only lashing tools out there, they are just my favorites.  What do you use?

Where to find these tools:

The Lash Ender is available for $8 from Mary and Jimmy Earl McKinzie at MJE2WEAVE.  You can reach them at mje2weave@gmail.com.

If you buy one, please tell them where you heard about these tools. No, I’m not getting a commission, its just nice for them to know.

*The basket being lashed in this blog is called ‘Wrapped Up’, it uses a lashing technique called  V lashing. In a nutshell, V lashing is going into each space twice before moving on to the next space. The pattern will be out soon.