Today I am posting a tutorial on another way to double lash your basket. Last month, I posted ‘Lashing a Basket with Waxed Linen‘ and, in that post, I showed how to lash with waxed linen and how to do a V lash. This tutorial will show you how to lash a basket going around the basket once and creating a double lash with a double X on each lash. If you are new to lashing with waxed linen you may want to read  ‘Lashing your Basket a Waxed Linen‘ to learn how to start the lasher, add on, and end the lasher.

Starting just to the right of the overlaps (to the left, if you weave left handed), secure the waxed linen and thread it from outside to inside in the next space.

Now bring the lasher over the rim and back to the outside. Including the space the waxed linen just went through, count forward two spaces, thread the waxed linen from outside to inside in this space. 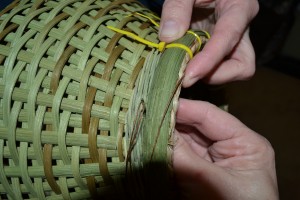 Next, bring the lasher to the outside of the basket, count one space back, and thread the waxed linen from outside to inside in this space. 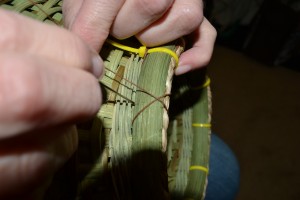 Repeat these steps and the lasher will create an X on the outside and an X on the inside of the rim, all while lashing around the basket once.

And sometimes it is nice to actually watch someone demonstrate, so here is a brief video: Double X Lashing with Waxed Linen 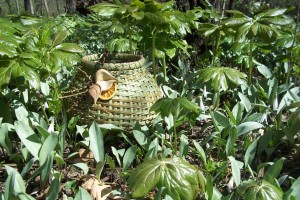 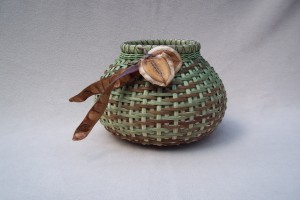